Lezing: “Hauntings: Reflections on Botticelli’s Man of Sorrows” on April 21, 2022 at 6PM

Michael W. Kwakkelstein | Director (NIKI) has the pleasure to invite you to a lecture on Botticelli’s Man of Sorrows, by our scholar-in-residence, Dennis Geronimus, PhD. (Department of Art History, New York University).

On January 27, Sotheby’s New York sold Sandro Botticelli’s Man of Sorrows for $45.4 million, making it the second most expensive work by the Florentine master ever to be sold at auction. Even by the measure of Botticelli’s most mysterious works, the Man of Sorrows emerges as one of his most uncanny. Marking a stark departure from the ethereal forms with which Botticelli is often associated, this disquieting image refocuses our attention on Botticelli’s lesser-known late years. The panel’s latest technical findings bring new dimensions of its conception and production to light. What new insights might the painting’s material qualities provide not only about its maker but about the object’s possible intended function and reception by its earliest beholders?

The lecture is open to the public free of charge. Pre-registration is required to guarantee seating: niki@nikiflorence.org

Dennis Geronimus is professor of Italian Renaissance Art at New York University, where he will be returning as chair of the Department of Art History this fall. Professor Geronimus earned his Ph.D. from the University of Oxford. His research interests include artistic crosscurrents between Italy and Northern Europe, as well as between Africa and the Mediterranean; artists’ engagement with the natural world; relationships between text and image; mythological narrative; and pictorial wit and humor. He has authored Piero di Cosimo: Visions Beautiful and Strange (Yale University Press, 2006), as well as various articles, essays, and reviews appearing in Burlington Magazine, Art Bulletin, Renaissance Quarterly, Mitteilungen des Kunsthistorischen Institutes in Florenz, and other publications. In 2015, together with Gretchen Hirschauer, he co-curated the first-ever retrospective on Piero at the National Gallery of Art, Washington, DC, a show selected as one of the best exhibitions of the year by the Wall Street Journal. Among his most recent publications are “Leonardo’s Last Supper and the Motions of the Mind,” appearing in the catalogue for the exhibition Leonardo da Vinci: The Language of Faces at the Teylers Museum in Haarlem; “Northern Exposure: Pontormo, Dürer and the Humor of the Body,” in the collection Rire en images à la Renaissance (Brepols, 2019); and “Into the Wild: Living Landscape and Wonderment in Renaissance Art,” appearing in Material World: The Intersection of Art, Science, and Nature in Ancient Literature and its Renaissance Reception, edited by Guy Hedreen (Brill, 2021). He is currently working on a monograph devoted to Jacopo da Pontormo, to be published by Yale University Press – and last winter guest curated Grey Matters at the Nicholas Hall Gallery in New York, a multi-media exhibition inspired by the rediscovery of Pontormo’s arresting Adam and Eve grisaille. His work has been supported by the Metropolitan Museum of Art, the Clark Art Institute, the ACLS, the Renaissance Society of America, the Warburg Institute, the Emily Harvey Foundation in Venice, and the NIKI, where he has rejoined us as a visiting professor this spring. 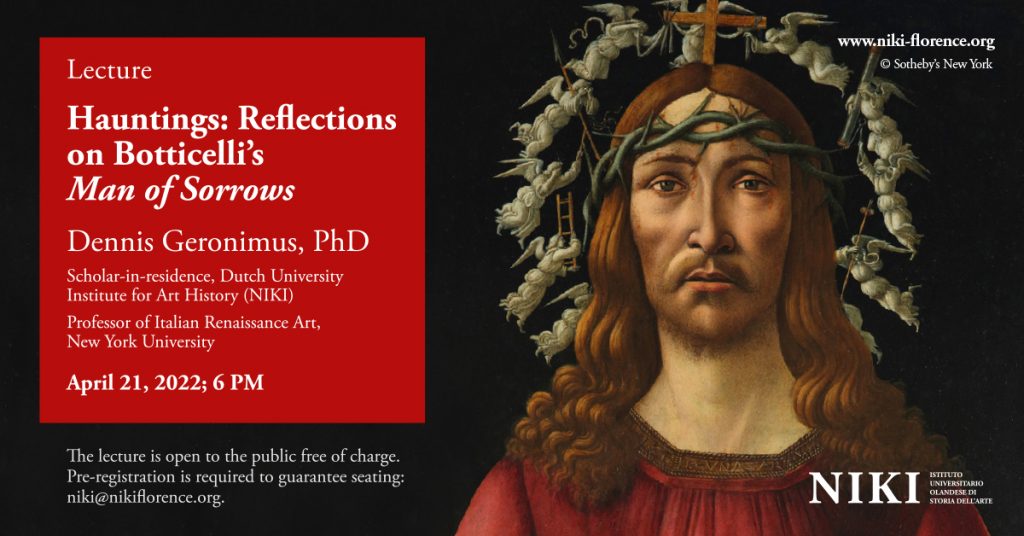